Wonderful ‘Garage Find’ in Wyoming.  Woman calls car collectors to ask if they would be interested in 30 cars her family still has stowed about in barns and garages.  Upon investigation, the Collectors discover some real gems.  Read the full article: Bluefield Daily Telegraph, Bluefield, WV – Local enthusiasts uncover hidden, almost lost, automotive treasures.

The collection included a 1925 REO, of which previously only 3 cars were known to have survived.  REO was a car company started by one of the Oldsmobile brothers after he lost the rights to Oldsmobile.  REO Speedwagon, the rock band, was named after an REO vehicle.

That would be the ideal end to the fairy tale-like reality that brought a special collection highlighted by a 1929 Plymouth, a 1931 Cadillac, a 1933 Buick, two 1929 Ford Roadsters, and a 1916 Oakland into Ruble and Rose’s garages recently. After all, it is the joy of collecting, not the buying and reselling that has kept the local business owners involved with classic cars for so long.

SO a 1931 Cadillac.  How were Cadillacs in 1931, in the depths of the Great Depression?  Impressive.

In 1931 the price of oil plunged to $0.15 / barrel. The US Congress voted to make the “Star Spangled Banner” the national anthem.  Canada declared independence.  Gambling was legalized in Las Vegas.  The Empire State building opened.  Unemployment reached 15.9%.  Gangster Al Capone went to prison for the rest of his life.

Special Fleetwood built body design by Harley Earl and Ernest Schebera for the V12 and V16 Cadillac chassis. Official GM Photograph from the General Motors Media Archives of a 1931 Cadillac Series 370-A Town Sedan.Click to go to GM Photostore to order prints.

That year, 1973, the Cadillac Eldorado with its 500 cubic inch V8 was the Indianapolis pace car.  Cadillac made a number of Eldorados identical to the pace car to mark the event.

The Cadillac That Followed Me Home: 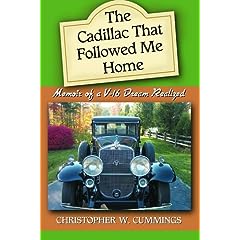 Want to know more about this era of Cadillac?  You might try this book on Amazon:
The Cadillac That Followed Me Home: Memoir of a V-16 Dream Realized.

Amazon notes: This memoir tells the story of a boy who grew up loving cars, learned everything he could about them, and acquired quite a few impressive models for himself, while always looking forward to the day he would, by surprising circumstance, find the automobile of his dreams. Early chapters reveal the adventure Cummings underwent renovating his first car at age 13. Over the course of his teenage years he would work to acquire three classic Cadillacs: a 1941 Cadillac Series 7523 seven-passenger touring sedan, a 1941 Cadillac Series 61 coupe, and a 1931 Cadillac Series 355A Fleetwood Cabriolet. Later chapters recount the painstaking effort he put into renovating and maintaining those coveted vehicles. The story culminates with Cummings’ unexpected acquisition of the car that earned the motto “Standard of the World,” the 1930 V-16 Imperial Sedan limousine. In all, this memoir bears witness to an elegant sample of the best that the Classic era of automotive history had to offer.

The Cadillac That Followed Me Home: Memoir of a V-16 Dream Realized. After I saw it on Amazon, I ordered one tonight. I’ll add a review after it gets here!