I recently have been re-reading The Cadillac Story, The Postwar Years, by Thomas E. Bonsall. 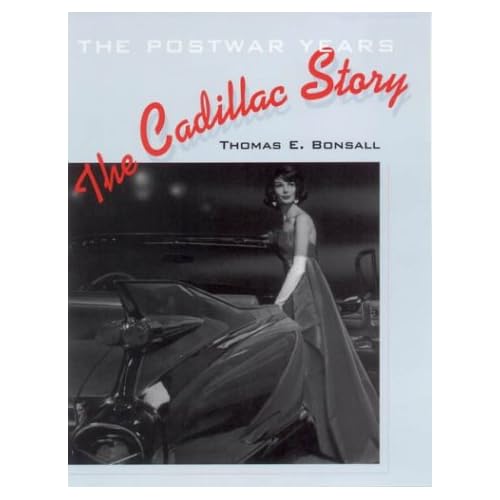 I enjoyed this book very much.  It tells the ‘behind the scenes’ story of Cadillac and their competitors from the depths of the great Depression to the early 2000s.  From Cadillac’s early struggles against Packard, to the emergence of Mercedes and BMW, then later Lexus and Acura, this book tells the good decisions and the bad decisions that defined Cadillac’s path for over 50 years.  As the cover flap says, although the book is focused on Cadillac, it also is the story of the overall Luxury Car business during this period.

The Author addresses who was in charge at GM or Cadillac at the time, explains the context of their situation relative to contemporary competitors, and what the outcome was of the choices they made.  I found this approach very informative, and thought provoking.

This book is NOT a detailed year to year reference; check the Standard Catalog of Cadillac for that.  This book is the story of the people and the situations and the competition to make the best luxury cars available.

This is a book I have read twice, and I suspect I will read it again in the future.  It is one of the books that has given me the impression that the Automobile business has ALWAYS been a highly competitive endeavor.

My copy was published in 2004, but originally the book was first printed in 2003.  So this book is best if you are seeking information about the development of Cadillac from the end of the 2nd World War until around 2000.

I like the chapter segregations, because this really gives one a capsule summary (the Cliff Notes Version) of Cadillac’s fortunes:

This book also discusses how Cadillac developed a TERRIBLE relationship with the Automotive Press, and the extent to which Cadillac was punished by the Press for their part in that relationship.  That in itself is a primer for our time.

I give The Cadillac Story, The Postwar Years, by Thomas E. Bonsall.
4 stars (out of 5):

1 thought on “Cadillac Books: The Cadillac Story, The Postwar Years”